Well the Winter Olympics are upon us and I have to admit I’m really excited about the next couple of weeks or so.

Admittedly I’m a skier. I was introduced to the delights of sliding down a mountain in the freezing cold by an ex-girlfriend relatively late on at 35 years old (I really wish it had been earlier now) and I struggled like hell for the first 2 to 3 days before it clicked and the bug got me. I even brought my first pair of boots at the end of my first holiday (to make sure I went back!).

But I don’t think that that’s why I get so excited about the Winter Olympics. It’s just the madness of it all. For example, who was the first person to decide that ski jumping was a good idea? Who thought that bobsleigh wasn’t crazy enough so we really needed luge as well? It’s fast, it’s exciting and to us Brits probably a bit exotic as well!

So dust yourself down and prepare to be enthralled by the likes of the short track speed skating, curling, slopestyle and Nordic combined. You are shortly to become armchair experts in things like halfpipes and ice dance and my own personal favourite the complete bedlam of ski-cross and snowboard-cross.

One of my own personal sporting heroes is also competing.

A chap called Dave Ryding. If you’ve not heard of Dave, he’s a Lancashire lad who learnt to ski on a dry ski slope and is now competing against the best in the world in one of the main events, the men’s ski slalom. Last year he came 2nd in the Kitzbuehel slalom world cup event (this year his 2nd run was the fastest of the lot) and he has also beaten the run-away world championship leader, Marcel Hirscher of Austria, in a head to head slalom in Oslo earlier this season. He’s top 10 in the world and on his day a real medal prospect! Like most of our winter Olympians he’s achieved this is on a shoestring compared to the major nations. So huge respect to all of our competitors and best wishes to all of them. They all represent a drive and commitment to their sport and their goals that us mere mortals can only dream about.

Overall, much of a muchness on the local authority TATs last month with no real change in the averages. If you really must know the average TAT slowed down by 0.2 of a day! However there were some quite big changes in individual councils, so it’s worth highlighting these.

One’s to look out for: 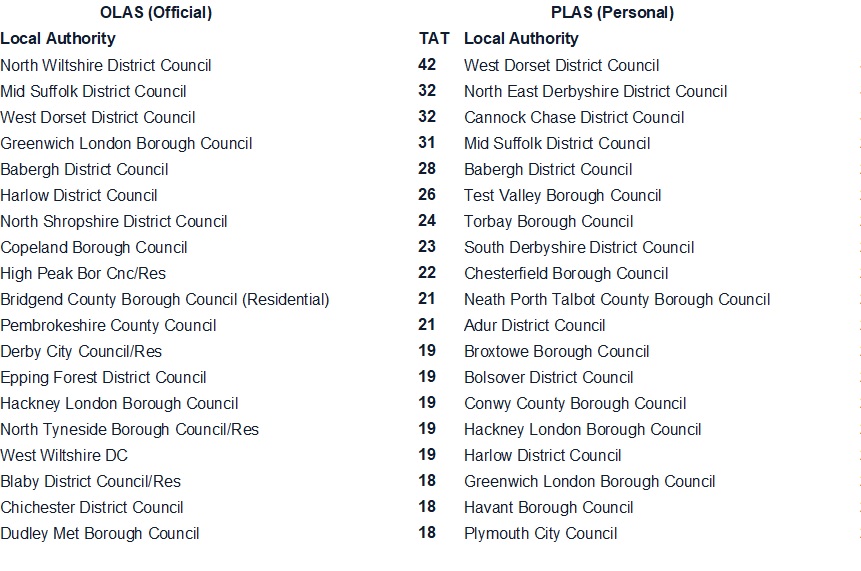 I’ll probably take a break from my ramblings next month as I’m away skiing at the beginning of March. Hopefully without any breakages this year, but of course that can never be guaranteed! And then it will be Easter!

Where has this year gone already?